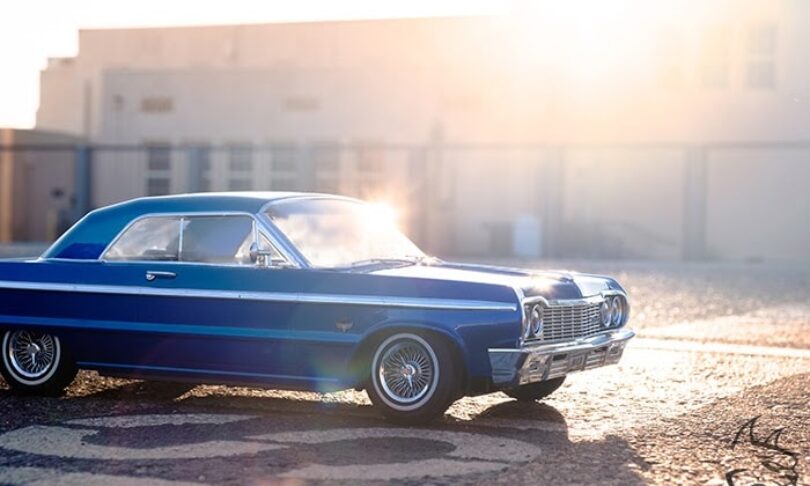 Redcat Racing has carved out a unique space for itself in the world of R/C lowriders. Starting with the release of the SixtyFour Chevy Impala Hopping Lowrider, they’ve established this segment of the hobby as their own, adding new accessories and models along the way.

If you’re a fan of lowrider culture and creativity or simply appreciate a well-crafted 1/10-scale R/C replica, the Redcat lowrider lineup covers both ends of the spectrum. Here’s a closer look at all of the radio-controlled lowrider options from the folks at Redcat:

Redcat Racing’s involvement in the lowrider scene can be traced back to one model; the SixtyFour. This wonderfully crafted 1/10-scale replica of the 1964 Chevy Impala has the appearance of a work of art and the inner workings of an engineering marvel.

While most on-road R/C cars boast large motors and big speed, the SixtyFour is perfectly content rolling along at a leisurely pace, popping, hopping, and lifting itself to stand out from the crowd. The heart and soul of this car is the REEFS RC 300 Alacritous servo, which provides the torque required to make this machine pop. Four additional servos serve as the power behind the front and rear raising and lowering action.

All of that realistic lowrider action would be nothing without a beautiful exterior. Thankfully, the SixtyFour is wrapped in the body style of the classic 1964 Chevrolet Impala. Available in three color options (blue, green, and purple) this model features a multi-part body with a detailed interior and over twenty chrome-plated trim pieces. Whether it’s sitting on a display case or hopping and popping on pavement, the SixtyFour is an eye-catching machine.

A 6-channel radio system provides the controls for the SixtyFour, whether you’re raising the front, rear, hopping it, or simply going for a cruise. The LR6X controller is a hallmark of every Redcat lowrider model.

Similar to the SixtyFour, the FiftyNine features a REEFS RC 300 Alacritous servo, which provides the torque required to make this machine hop and jump. Two rear servos serve as the power behind the rear axle raising and lowering action.

A 6-channel radio system provides the controls for the SixtyFour, whether you’re raising the front, rear, hopping it, or simply going for a cruise. The LR6X controller is a hallmark of every Redcat lowrider model.

Redcat’s newest model takes the late-70s style of the Chevy Monte Carlo and pairs it with a new chassis to create a new R/C lowrider experience. The 1979 Chevy Monte Carlo lowrider captures the long, low-slung body style of this classic cruiser and marries it to a chassis that features four 25kg servos for lift and lower action.

While this model doesn’t include the “hopping” action found on the SixtyFour, it does recreate the iconic raising and lowering action found on many lowriders. What’s more, the chassis will support a wide array of aftermarket bodies, allowing for even more customization.

If you prefer to take a hands-on approach with your R/C vehicles, the LRH285 Lowrider Chassis will give you total control over your R/C lowrider build. Featuring the same servo and chassis configuration found on the SixtyFour, the LRH285 allows you to take a clear Impala body and apply your own paint, decals, and details to create a one-of-a-kind machine.

← Team Associated Rival MT8 Brushless RTR Monster Truck
Review: H-Tech Custom Products Front and Rear Aluminum Bumpers for the Traxxas TRX-4 2021 Ford Bronco →
We use cookies on our website to give you the most relevant experience by remembering your preferences and repeat visits. By clicking “Accept”, you consent to the use of ALL the cookies.
Do not sell my personal information.
Cookie SettingsAccept
Manage consent