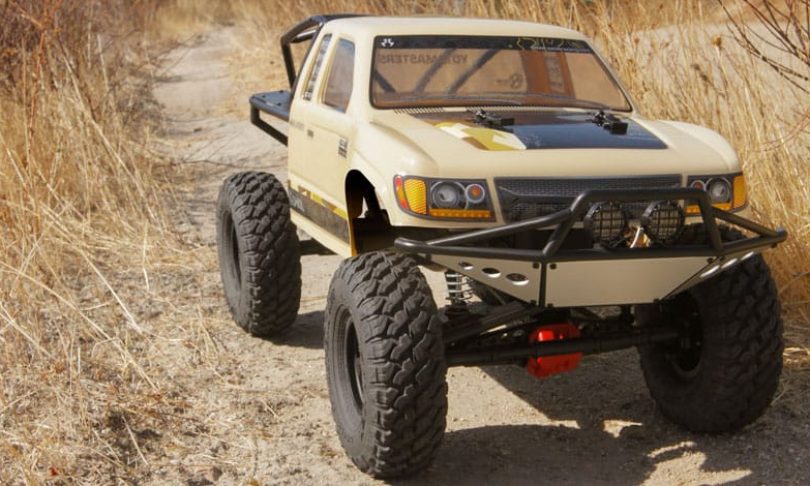 Every hobbyist has a vehicle which they consider to be their all-time favorite. For some, the classic buggies and stadium trucks of the 80’s and 90’s take hold that honor, while others may hold more recent releases in high regard.

For scale R/C and radio-controlled adventure fans, the Axial SCX10 Trail Honcho (AX90022) is regarded as one of the most-beloved trail rigs on the market. Although the original has been discontinued, many still carry a torch for this rough and tumble rock crawler.

Axial has either heard the cries of the Trail Honcho faithful, or they’ve been planning this release for quite some time. No matter what, trail R/C fans have another vehicle to choose from when getting ready to head outdoors.

The Axial SCX10 II Trail Honcho (AX90059) builds on the now, well-established platform of the SCX10 II while giving a nod to the heritage of the original Trail Honcho rig.

At first glance, the 2017 model looks like a slightly updated machine, with a tan/beige body perched atop the chassis, rather than the classic silver. The exposed rear bed and roll-bar make a return to the SCX10 II variant, leaving one to wonder where the changes take place.

For starters, the 2017 Trail Honcho features the same eye-catching red diff covers that the SCX10 II has become known for. Along with that chassis trait, this new Trail Honcho uses a chassis-mounted steering servo (Tactic TSX45), AX10 transmission, and AR44 axles, keeping most of the foundation on-par with the previous two SCX10 II releases.

The rear trailing arms/suspension links feature a slightly different design, looking more angular than on previous models. Although they’re plastic/nylon, they appear to be quite beefy and should hold up well to most trail terrain. 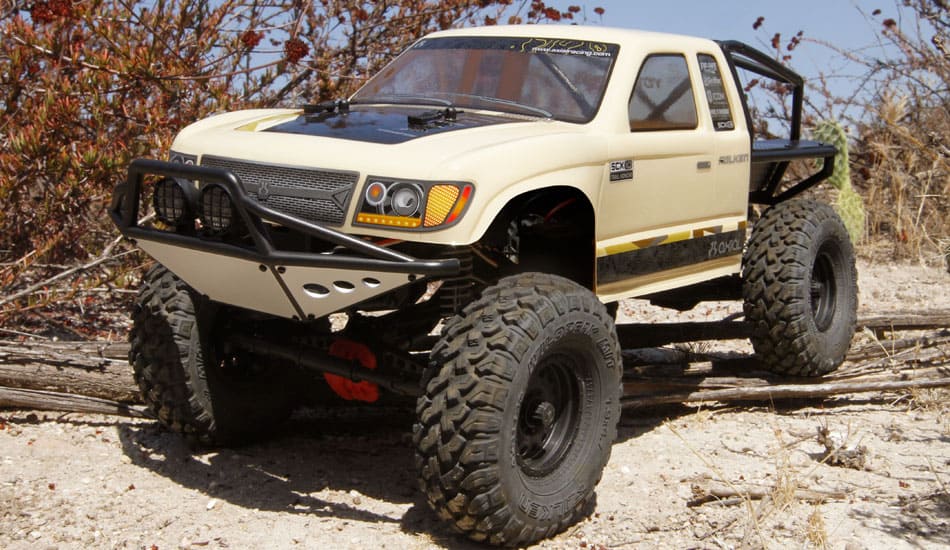 On the electronics front, a Tactic TR325 3-channel receiver and Tactic TTX200 transmitter are included in this ready-to-run (RTR) package.  While the receiver is solid, I have some reservations about the choice of controller for this model. I feel that the TTX200 is fine for short drives, however, I’m not sure how well the ergonomics will hold up for longer adventures.

This rig did complete a trip through the Redonda Ridge OHV Trail, so my concerns about the controller comfort may be completely off-base.

The 2017 Axial SCX10 II Trail Honcho is priced at $329.99, putting it in the middle of some comparably-priced crawling rigs. If you have a taste for the classics, this updated trail-trekker might be just the right machine for you.

← Fully Upgraded: Traxxas Special Edition Funny Car
Enter to Win: Redcat Racing’s Carbon 210 Race Drone Giveaway →
We use cookies on our website to give you the most relevant experience by remembering your preferences and repeat visits. By clicking “Accept”, you consent to the use of ALL the cookies.
Do not sell my personal information.
Cookie SettingsAccept
Manage consent