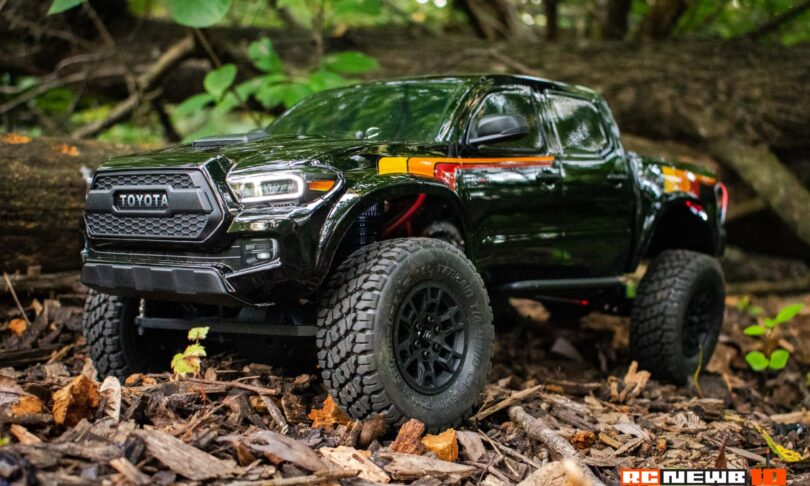 We’re living in some amazing times, especially if you’re a fan of the R/C hobby and scale, trail-riding vehicles. A boom in popularity roughly five years ago saw a number of new brands joining the party, most of which are still around today. As the years have gone on, each manufacturer has raised its game, whether through styling and/or engineering. Carisma Scale Adventure, once a fresh face on the scale R/C scene, has seen its model lineup grow and mature through the years. Their latest 1/10-scale release, the SCA-1E 2.1 Spec Toyota Tacoma TRD Pro, might be their best release yet.

Always a leader in scale detail, Carisma has tweaked and tuned its SCA-1E platform to achieve better crawling and trail performance while, at the same time, raising the bar in terms of scale realism and visual detail. The folks at Carisma Scale Adventure set me up with one of their early-release SCA-1E 2.1 Spec Toyota Tacoma TRD Pro models, so let’s take a closer look at this truck from the inside out.

Let me talk about the biggest asset that this rig has to offer; its officially licensed 2021 Toyota Tacoma TRD Pro body. As I mentioned earlier, Carisma has a knack for nailing scale detail in their models. There have been several Tacoma-esque 1/10-scale trucks to hit the market over the years, but this one has the official blessing of Toyota, and it shows. From the body lines to the details found in the grille, hood scoop, side mirrors, and headlights, the exterior of this truck is simply stunning.

Carisma didn’t stop at the body when applying its details. The plastic, 1.9″ beadlock wheels found on the SCA-1E 2.1 Spec Toyota Tacoma TRD Pro are officially licensed as well and use the same pattern found on the 1:1 Tacoma. Mounted to those wheels are Carisma’s All Terrain Super Scale (ATSS) tires. From an appearance perspective, these are nice tires to have while trail driving. Extreme crawling, however, might leave you with a different experience.

There is one small, scale detail that bugs me about this truck, and that’s the bed. Carisma integrated the front and rear bumpers directly into the body, eliminating the need for chassis-mounted bars. While this approach adds to the scale realism, it causes the bed to sag downward through to its lack of proper support.

My first (and only) experience with the SCA-1E platform to date was with Carisma’s Lynx. Since that model was released, the SCA-1E platform has been massaged, with the chassis receiving performance enhancements such as a chassis-mounted servo, front-mounted battery tray, and Anti Torque Twist (ATT) transmission.

All of these chassis-focused enhancements help the crawling performance and weight distribution of this truck. While all of those changes aren’t new to the 2.1 Spec SCA-1E, the Tacoma model does include Carisma’s ARC-2 ESC as a factory-installed option.

With 18 customizable settings, the ARC-2 opens up a whole new world of possibilities when it comes to the performance of this rig. Serving as the controller for a 5-pole, brushed motor, this truck has been tuned for low-end performance. In its default settings, I found the overall crawling power to be excellent; however, throttle input was a bit touchy on the low end. Aside from that, it performed like a champ.

Out on the trail or running through the woods, the SCA-1E 2.1 Spec Toyota Tacoma looks right at home. Changing course from their other 1/10-scale models, Carisma has paired this version of the SCA-1E with its CTX-2000 transmitter. Commonly found alongside their 1/24-scale MSA-1E models, this controller offers the same features and settings found in transmitters with a larger footprint.

Fitting perfectly in your hand or in your backpack, this controller feels great and has just enough weight to make you notice it but not too much so that it fatigues your hand.

I found the crawling performance of this truck to be on-par with other crawlers; however, the light weight of the chassis and stiffer tires did cause some issues on trickier, gnarlier obstacles. Still, I had a great time wheeling this rig in a local forest.

I’m admittedly not a Toyota Tacoma fan, but having this truck on my bench and in my collection might be changing that. Carisma nailed the visual details of this truck and has given 1:1 Toyota fans something to cheer about on a smaller scale. Crawling performance, while solid, could use some massaging. But if you love modern pickup trucks that are wonderfully recreated in 1/10-scale (and that have the performance chops to back it up), you’re going to love this truck.

Priced at $379.99, the Carisma SCA-1E 2.1 Spec Toyota Tacoma TRD Pro can be purchased directly from Carisma and its dealers.

← Axial and Pro-Line Team up to Celebrate 40 Years of Fun with the SCX10 III 1982 Chevy K10 RTR
Does Short Wheelbase = Big Fun? Element RC Unveils the Enduro Bushido RTR →
We use cookies on our website to give you the most relevant experience by remembering your preferences and repeat visits. By clicking “Accept”, you consent to the use of ALL the cookies.
Do not sell my personal information.
Cookie SettingsAccept
Manage consent