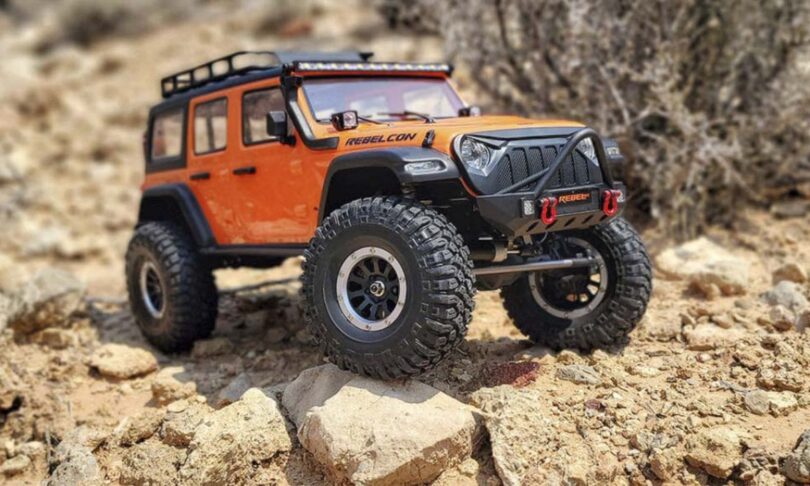 Year after year, the scale R/C crawling and trail truck scene has experienced impressive amounts of growth. The groundswell of popularity for this genre of radio-controlled vehicle has brought a number of brands to the table. Although we’re nearing the end of 2021, there have been more than a few new model developments in the scale R/C scene this year. Here are some of the highlights:

Redcat Racing Goes Big with the 1/8-scale TC8 Marksman
After finding plenty of success in the 1/10-scale crawling scene with their GEN8 platform, Redcat has turned its attention to 1/8-scale trail trucks with the TC8 Marksman. Featuring a Jeep-inspired body, the massive Marksman features plenty of scale detail along with a trail-tested Holmes Hobbies brushed motor.

Visit redcatracing.com to learn more about the TC8 Marksman ($439.99)

Traxxas Goes “New School” with its TRX-4 2021 Ford Bronco
In the 1:1 automotive world, no vehicle in recent memory has received as much attention as the 2021 Ford Bronco. This legendary nameplate has not only made a triumphant return to the full-size trail but it’s become a fixture on the scale trail as well. Traxxas has applied the body style of the modern Bronco to its popular TRX-4 platform and has also introduced a new “clipless” body mounting system to its trail machine. Not only is this mounting system easy to use, but it keeps the body clean and free of unsightly body post “nubs”.

Axial Kicks it “Old School” with the SCX10 III “Early Bronco”
From one end of the Bronco timeline to another, Axial rolled out its SCX10 III “Early Bronco” ready-to-run (RTR) featuring a classic, rugged off-road body. Featuring tube-frame doors, interior scale details, and a massive 1/10-scale body, this version of the SCX10 III has quickly gained a popular following among scale R/C enthusiasts. Not only does it offer classic styling and plenty of visual goodies, but it also brings straight axles to the SCX10 III platform.

Carisma Scale Adventure Refreshes its SCA-1E Lineup of RTRs and Kits
After a quiet 2020, Carisma has emerged from the shadows with a series of refreshed “2.1” series SCA-1E crawlers. Available in both kit and RTR configurations, many of Carisma’s popular nameplates now feature improved transmissions, chassis setups, and crawler-specific gearing. The Coyote SCA-1E 2.1, 1976 Ford F-150 LWB 2.1, Land Rover 2.1, and the new Prairie Wolf 2.1 all feature refreshed components and visual queues.

Element RC Goes All-in on Scale Detail with the Enduro Knightrunner
Throughout the year, Element RC has been refreshing a number of models in its lineup, but none have generated buzz like the Knightrunner. Through a collaboration with Knight Customs, the Knightrunner brings scale detail to an entirely new level, offering a collection of 3D-printable parts designed specifically for this 1/10-scale trail truck.

A New Contender Emerges in Rebel RC and the RJ Rebelcon
Out of all the new or refreshed scale/trail R/C releases in 2021, none have piqued my interest as much as the Rebel RC RJ Rebelcon. Rebel RC made its debut in the middle of 2021, serving as an online shop for a selection of R/C adventure and crawling models. Within the past few weeks, they’ve taken the wraps off of their first 1/10-scale model, the RJ Rebelcon.

Featuring a Jeep Wrangler-like body, this trail machine offers just about everything you can imagine, from remote locking/unlocking diffs, a remote two-speed transmission, scale visual details, and pre-installed LED lights. Priced attractively at $459.99, the RJ Rebelcon appears to be an extremely attractive option for hobbyists who want something that’s just outside the norm.

← Get to Know Tamiya’s Upcoming Super Avante Kit and TD-4 Chassis [Video]
Axial is Teasing a Big Announcement on 10/14/21 →
We use cookies on our website to give you the most relevant experience by remembering your preferences and repeat visits. By clicking “Accept”, you consent to the use of ALL the cookies.
Do not sell my personal information.
Cookie SettingsAccept
Manage consent