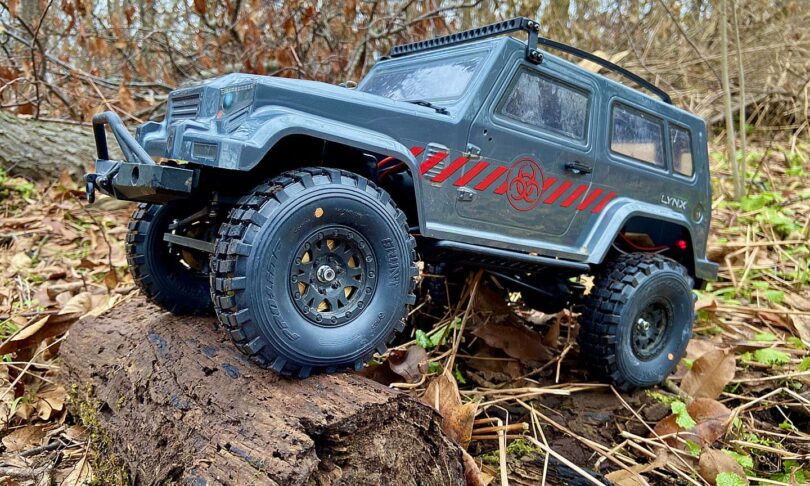 When it comes to upgrades, sometimes you just can’t stop. That’s been the case with my Carisma Scale Adventure Lynx SCA-1E. This trail rig has had seen plenty of overhauls since it rolled into my garage, but every tweak and modification has made it that much better. Although I had already upgraded the tires on this trail truck, Pro-Line’s recently-released, military-truck-themed Grunt tires grabbed my attention as soon as they were announced.

I had previously upgraded the tires on the Lynx to a set of Pro-Line 1.9” Hyrax tires, and they’ve performed beautifully. That said, the overall size of the Grunt tires is smaller and narrower than the Hyrax set, making them a better visual fit on the Lynx. The sizing inside of the wheel-wells, however, was a bit of an issue.

Striving to improve the look yet maintaining superb traction performance, let’s see what a set of Grunt 1.9″ can do. Thank you to the folks at Pro-Line for the opportunity to give these tires a first-hand review and shake-down. 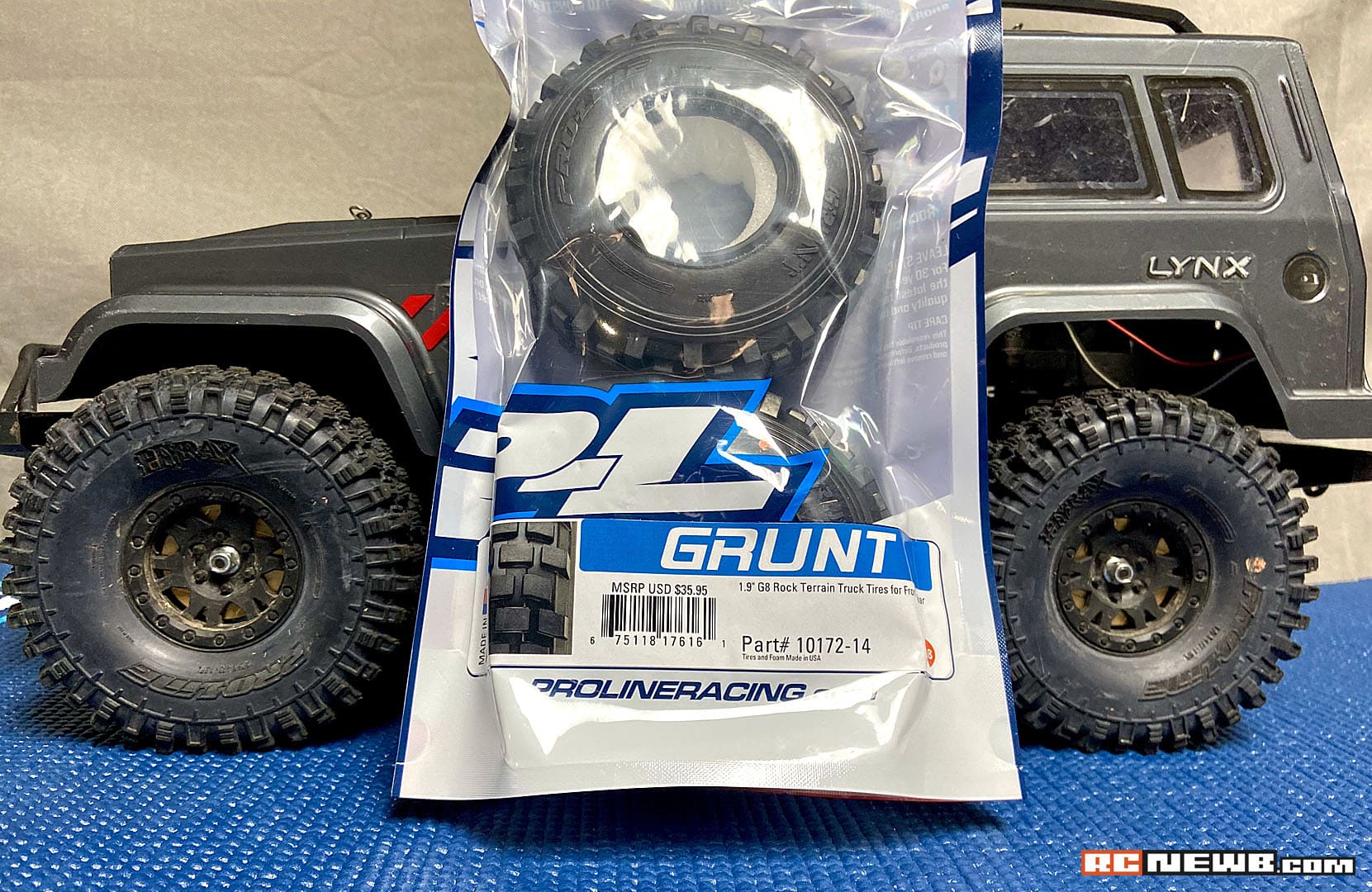 There are plenty of reasons to upgrade the tires on your radio-controlled rock crawler or trail truck, with performance and visual appearance being the top two on most people’s lists. In my case, I’m taking a set of tires that I love (Hyrax) and throwing caution to the wind in the hopes that this newcomer can perform as well, if not better, than my old pair of “shoes”.

What gave me hope going into this tire swap was the fact that both the Hyrax and the Grunt tires are made from Pro-Line’s G8 compound. While it’s not as soft as their Predator rubber, it’s still quite flexible and provides an amazing level of traction.

Honestly, the main driver behind my switching tires on the Lynx is for appearance reasons. 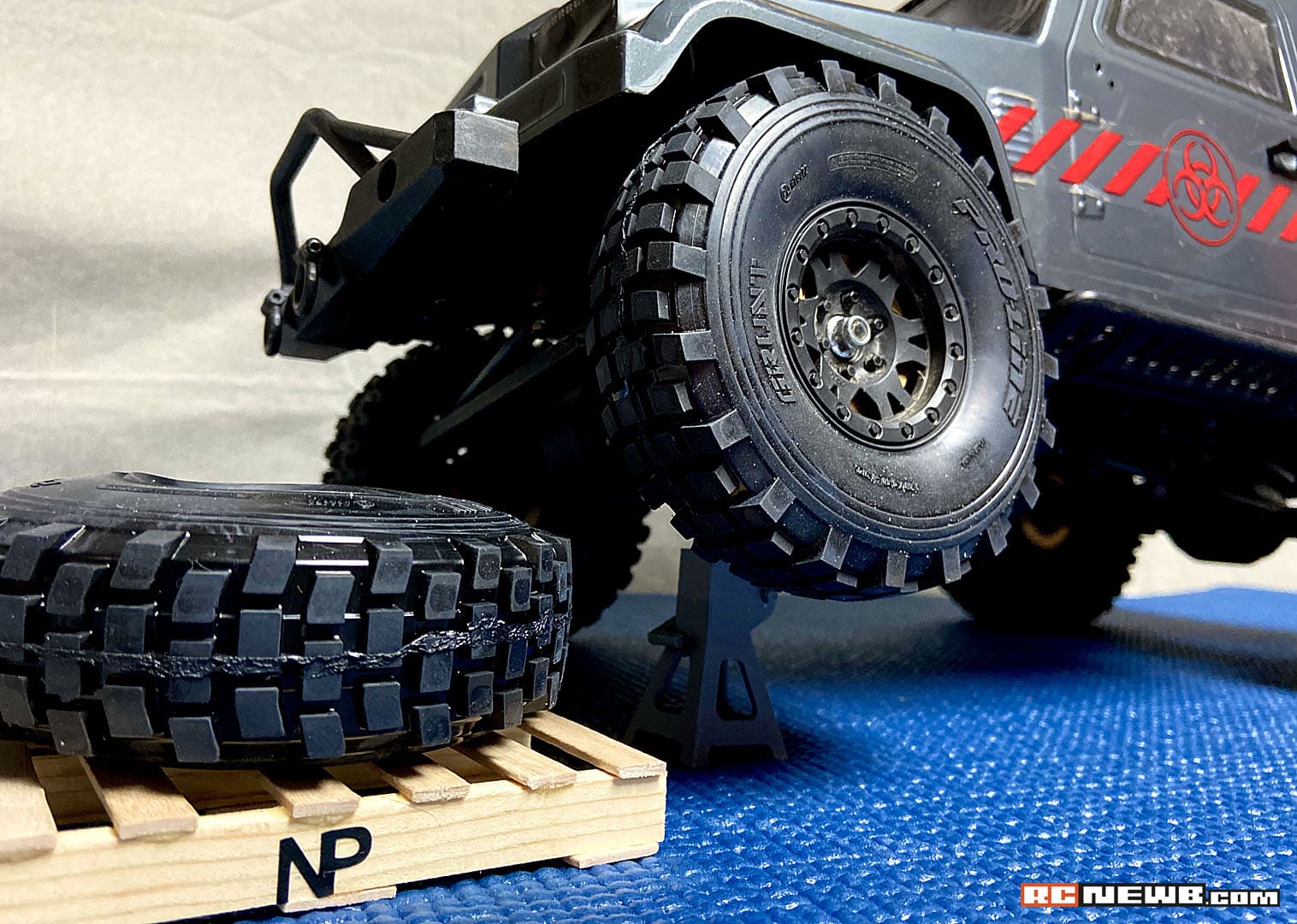 What you’ll need to complete the installation: 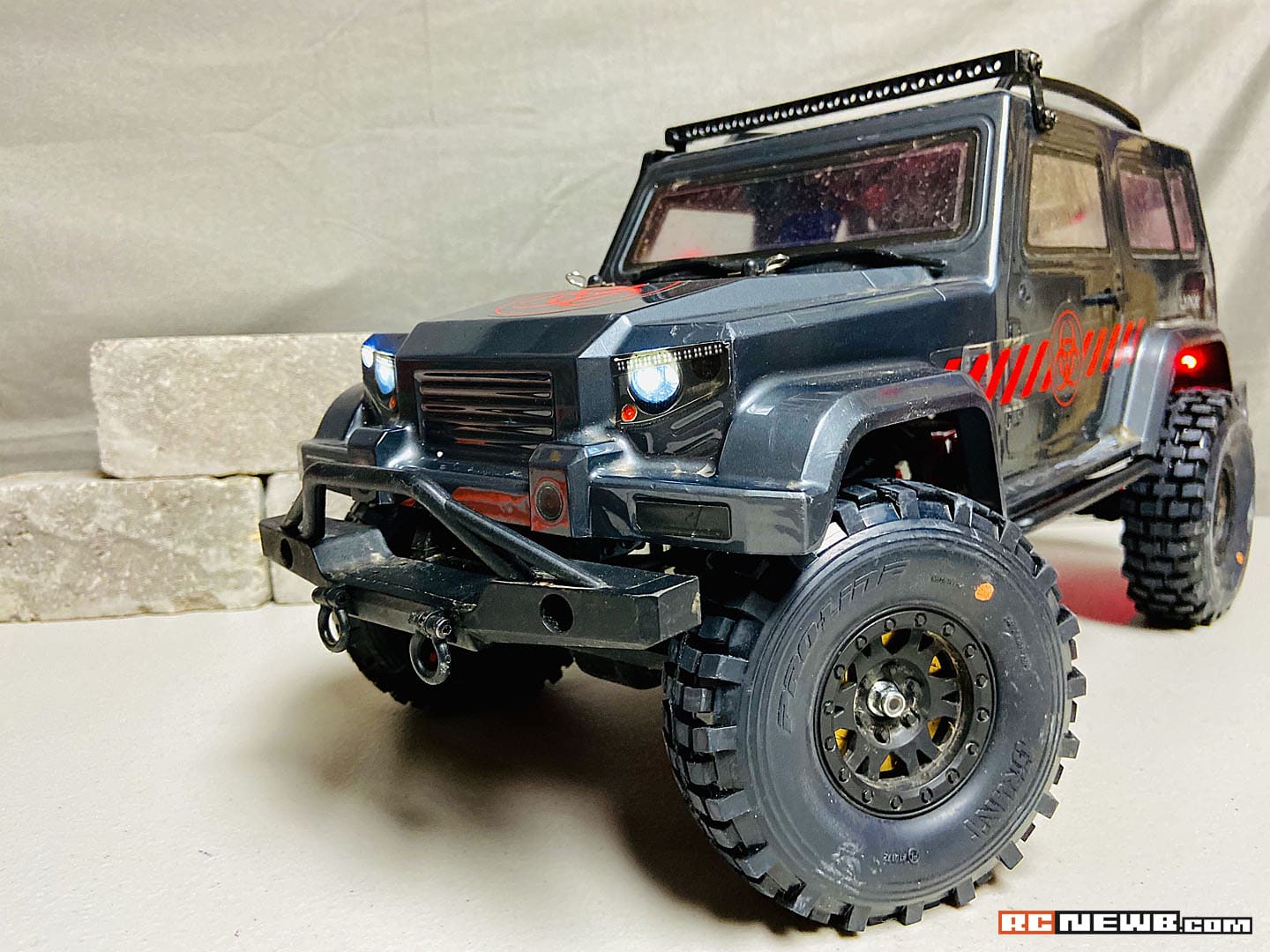 I’ve lost track of how many sets of tires I’ve installed throughout the years, but it’s becoming a routine task for me, almost like riding a bike. Take apart the wheel, pull it apart, remove the old tire, reverse the process and repeat until you’re rolling on brand-new rubber.

For the Grunt tire install, I stuck with Pro-Line’s Impulse Internal Bead-Loc Wheels as they are easy to install and have an appearance that I’ve grown to appreciate. Using the detailed method outlined above, it didn’t take me long to get the old tires off of the rims and have the new ones bolted on and ready to roll. 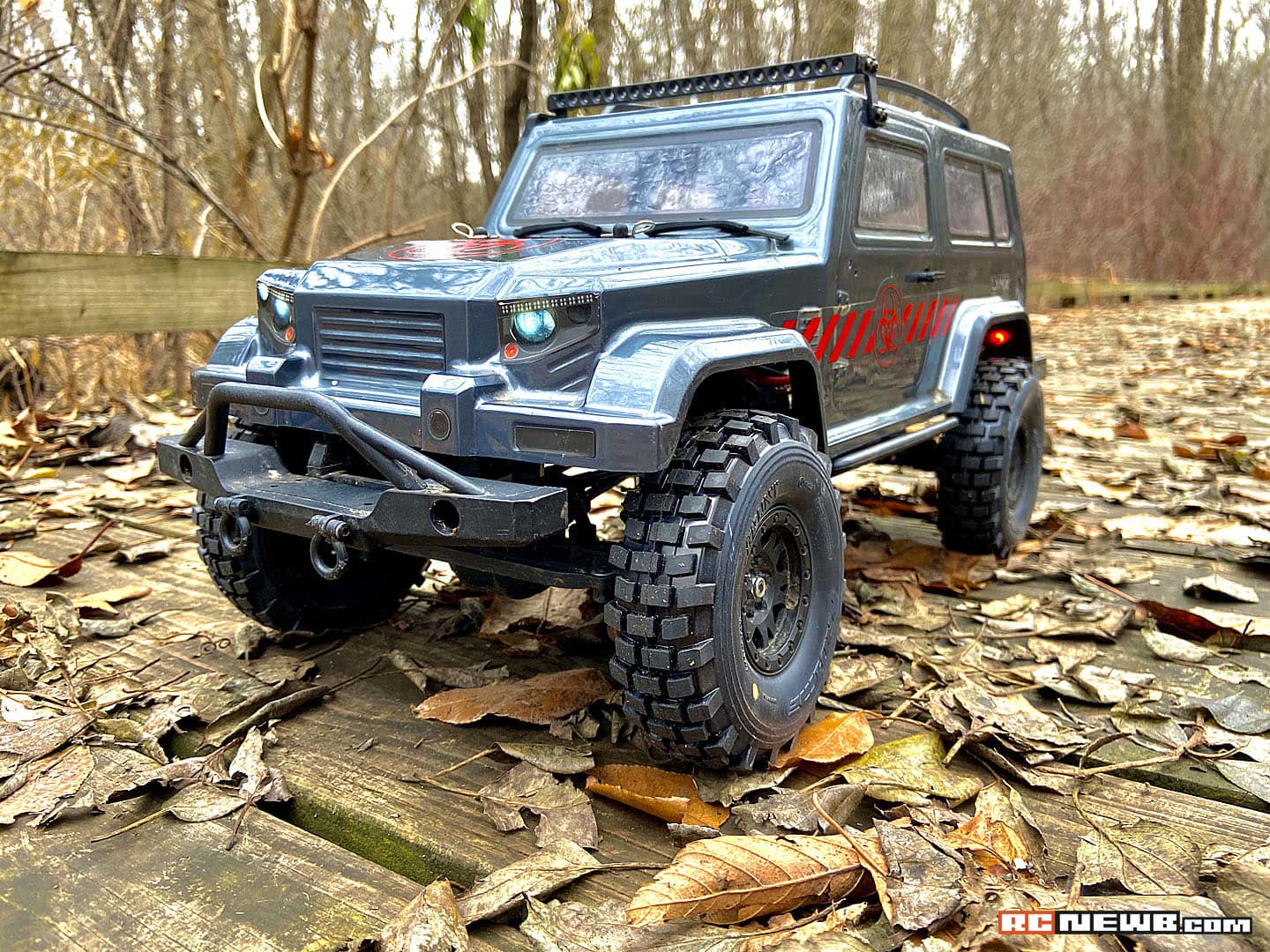 Patrolling Through the Woods

I knew that the Grunt tires were smaller than what I was replacing, but after I installed the first tire, I began to wonder if I was making a mistake. These new tires looked downright tiny when compared to the “massive” Hyrax. That fear quickly evaporated as soon as all four tires were mounted and installed. In fact, I’m convinced that these are the tires that should be included with the Lynx from the start.

How the vehicle looks is important, but how it performs is of even greater importance. Thankfully, Pro-Line’s Grunts have proven themselves to not only look the part of a rugged, adventure-seeking tire, but they also back that up in their performance. While they don’t offer the same height and ground clearance benefits as the set of Hyrax tires did, the smaller size and deep tread on a set of Grunts can hold its own against a variety of obstacles.

Whether taking on the challenges of nature or simply motoring over a pile of wood and brick, these tires performed as well as I could have imagined. 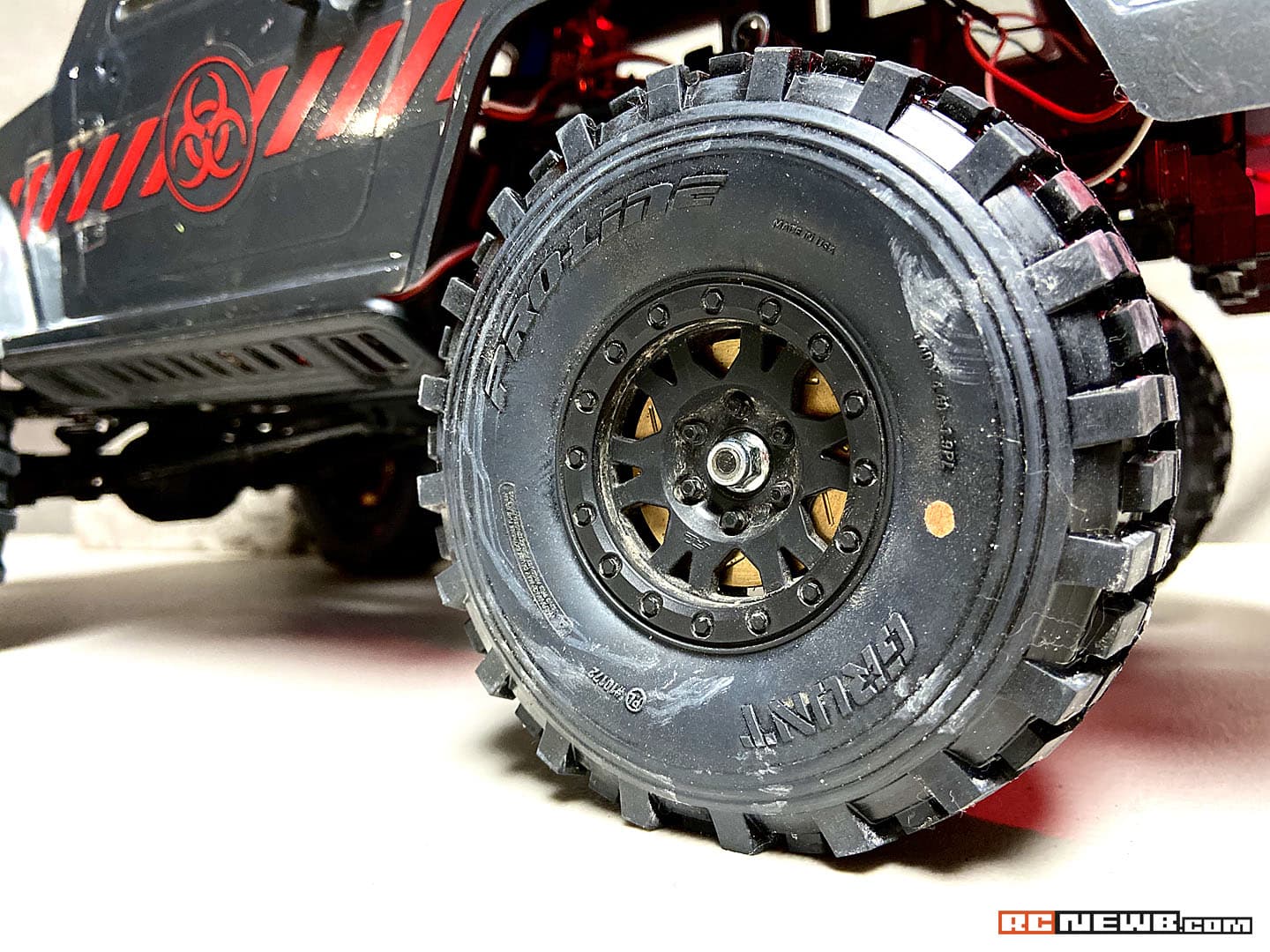 Pro-Line’s Grunt 1.9” crawler tires might not be the right fit for every scale R/C project, but if you’re customizing your ready-to-run (RTR) rig or building a model from the ground up and have an eye toward either a military or utility theme, then these tires fit the bill perfectly. Despite their smaller height and width, they punch well above their class in terms of performance. They’ve definitely made me a believer in what they can do.

To check out a set of Grunt 1.9” G8 Rock Terrain Truck Tires for yourself, visit prolineracing.com or your stop by your favorite Pro-Line dealer.

Save 10% on your next order from prolineracing.com with coupon code RCNEWB10!

← Super Savings on Scalers, Competition Kits & More During AMain Hobbies Black Friday Sale
20% Off Cyber Monday Sale at Hobby Recreation Products →
We use cookies on our website to give you the most relevant experience by remembering your preferences and repeat visits. By clicking “Accept”, you consent to the use of ALL the cookies.
Do not sell my personal information.
Cookie SettingsAccept
Manage consent