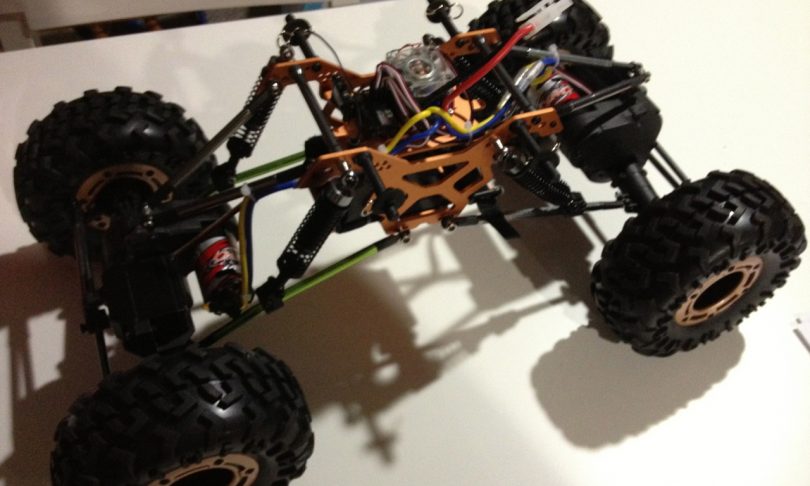 I’ve undergone quite the transformation with this hobby over the past few months.  At one point, I wasn’t a big fan of rock crawlers and other “slow” machines because, well, they weren’t fast.  Part of the initial appeal of this hobby (for me) was to get a vehicle that looked cool and could go fast.  After having one of those vehicles for a year, I found myself wanting to explore other avenues.

Part of this was due to the fact that my yard isn’t the largest spot to be able to easily run my Traxxas Slash at the speeds I like to run it, and I don’t have the time needed to pack it up and drive it to a larger space, only to spend a half an hour there for a full battery run.  After watching some fellow r/c enthusiasts post photos and video about how much fun they were having with their rock crawlers, I decided to give this segment of radio-controlled vehicles another look.

After doing some research on my own and seeing what was involved in the crawler side of things, I narrowed my purchase possibilities to the Redcat Racing RS10 and the Axial XR10   The RS10 won out and I was on the path to getting my feet wet with a new aspect of the hobby.

After playing around with the stock configuration, I’ve been adjusting the chassis a bit and realized that the real fun in this genre of r/c vehicles is taking things to the extreme, or at least well-past where they were intended.  With that in mind, I’ve got my sights set on modifying the RS10 into either a “scaler” or some sort of scaler-hybrid where it has many realistic features and elements, but to keep costs down, I may have to skip a few of the internal changes that I’ve seen (such as overhauling the chassis and massive motor upgrades).  In short, this is going to be a Frankencrawler.  A mishmash of parts and pieces that will (hopefully) look and run the way I want.

The first upgrade that I’ve done has been to replace the stock lower chassis links with Axial 6x101mm 30-degree lower links.  While it hasn’t gone as smoothly as I’d have liked it to go (so far), I’m confident it will get me where I need to be after a little retooling and modification.  The major issue that I’m running into is the link that is mounted next to the motor is rubbing up against the motor canister as well as the wire connection points.  My next step in this project is to either widen the point on the chassis where the lower links are mounted and/or switch the links around so the bend occurs earlier, which should clear the motor completely.

As for updates past that, I’m looking at a rear steering lockout kit, a new body (Jeep, perhaps) and a few scaler accessories.  One thing’s for sure: this is pure fun.

← Fourth of July Savings
Forget the foam: Removing tire foams for more crawling grip. →
We use cookies on our website to give you the most relevant experience by remembering your preferences and repeat visits. By clicking “Accept”, you consent to the use of ALL the cookies.
Do not sell my personal information.
Cookie SettingsAccept
Manage consent