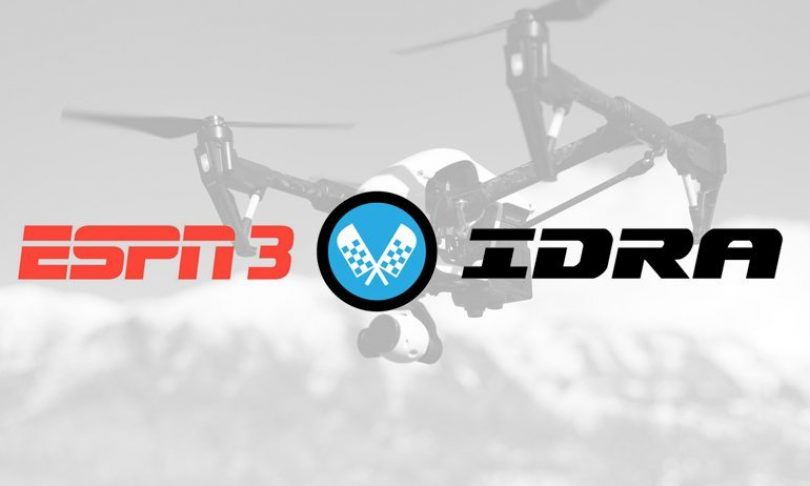 My interest in multi-rotor/drone racing appears to be on the same path as that of the general public; on the rise. The news today that ESPN has signed a multi-year deal with the International Drone Racing Association (IDRA) is a major shot in the arm for not only this organization (the global leader in first-person-view quadcopter competitions) but also the sport as a whole. If you’ve been paying attention to the competitive multi-rotor News over the past few months, you’ve undoubtedly heard a similar from all major drone racing organizations; this is the sport of the future.

Only time will tell if drone racing can truly take off and establish itself as a die-hard spectator (motor)sport among the likes of NASCAR, motocross, and Formula 1. While I’m personally hopeful that This form of racing is able to capture the imagination and most-importantly, the attention, of the mainstream public. Even if it grabs and retains a niche market, that may be enough to call it a success. However, I feel with the amount of money that is being poured into the organizations, the venues, and the events, anything short of an worldwide eyeball grab will be looked at as a letdown.

R/C racing as a whole has been looking for a hook that will carry it into the spotlight, but to-date, hasn’t been able to achieve that goal. Quadcopters and multi-rotor aircraft have captured the public’s imagination in a unique way, which is part of the buzz fueling these competitive events. The unique FPV views that each drone racing competitor uses to compete also enables the spectator to see what the racer is seeing, when they’re seeing it. This goes beyond a roof or in-car camera that have become commonplace in traditional, televised motorsports.

Learn more about the ESPN/IDRA announcement, read the release on espnmediazone.com.

← What to Need to Pack for Your Scale/Trail R/C Adventure
RECON G6 Gains RC4WD as Title Sponsor for 2016 →
We use cookies on our website to give you the most relevant experience by remembering your preferences and repeat visits. By clicking “Accept”, you consent to the use of ALL the cookies.
Do not sell my personal information.
Cookie SettingsAccept
Manage consent