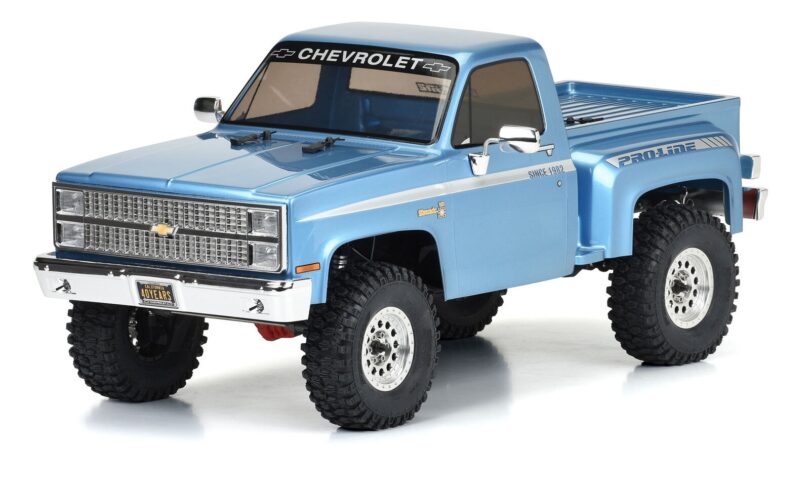 It’s time to celebrate! Pro-Line, who’s been a staple of the R/C industry and hobby for 40 years, is marking the occasion with a special edition collaboration with Axial.

Built on the SCX10 III portal-axle platform, this special edition Pro-Line 1982 Chevy K10 has several upgrades and commemorative elements sprinkled throughout. The most obvious item is the body, a faithfully replicated 1/10-scale Chevy K10 step-side pickup truck. Painted in sky blue, this truck features special-edition decals and injection-molded, chromed bumpers, a grille, and other body accessories.

Each Axial SCX10 III Pro-Line 1982 Chevy K10 features a numbered motor plate, signifying where your rig was on the assembly line. Also included with this commemorative model is a Pro-Line 40th Anniversary coin featuring Pro-Line’s logos throughout the past 40 years.

Priced at $599.99, this 40th Anniversary SCX10 III Pro-Line 1982 Chevy K10 Rock Crawler is a truly unique model, with only 1,982 being built. If you want to get your hands on one, you can pre-order it directly from Horizon Hobby or from other HH entities:

← Enter to win a TC-8 Marksman 1/8-scale R/C Crawler from Redcat Racing
Review: Carisma SCA-1E 2.1 Spec Toyota Tacoma TRD Pro RTR →
We use cookies on our website to give you the most relevant experience by remembering your preferences and repeat visits. By clicking “Accept”, you consent to the use of ALL the cookies.
Do not sell my personal information.
Cookie SettingsAccept
Manage consent